In recent years, Disney Parks has done a phenomenal job creating immersive lands that really drop you right into the story. From Toy Story Land at Walt Disney World to Star Wars: Galaxy’s Edge at both Disneyland and Walt Disney World, these lands are must-sees for theme park fans. One of my favorite of these lands, however, pre-dates both of these – Cars Land at Disney’s California Adventure at Disneyland Resort.

Cars Land, based upon Radiator Springs from the Pixar Cars franchise, features three attractions, several quick-service restaurants, and gift shops. This adorable little fictional town along Route 66 is the perfect centerpiece for a Disney theme park land. The themed area is so immersive and accurate, from the Cadillac Ranch mountains to the neon lights over this small town, so you’ll really feel like you stepped into the movie.

While you may want to visit during the day for the rides, I definitely recommend going back when it’s dark out so you can see it in all of its neon glory.

Cars Land is located at Disneyland Resort in Anaheim California. Specially, you can find it at the Disney California Adventure Park, located between Pacific Wharf and the soon-to-open Avengers Campus (near Pixar Pier). It’s on the opposite side of the main entrance of the park.

If you aren’t as familiar with Disneyland, know that it’s very easy to park hop if you have that option on your tickets. You can walk from park to park, and won’t even need to go through bag check a second time.

There are three main attractions at Cars Land in Disney’s California Adventure. All of them are specifically themed with Cars and Radiator Springs scenes and characters.

Radiator Springs Racers is the signature attraction in Cars Land, and it’s a must-ride. Because of that, you’ll find that the wait times can be quite long since it’s a popular ride. There is a single rider line option if you don’t mind breaking up your party to ride a bit quicker.

The ride mechanism and ride vehicle are similar to Test Track in Epcot at Disney World. You’ll ride in a car as you get ready for a race. Within the dark part of the ride, you’ll see popular characters from the movie.

Then, just as in Test Track, you’ll race outside among the models of the Cadillac Range Mountains. While the anticipation of the race and seeing the characters is fun, the really thrilling part of the ride is the big race.

Radiator Springs Racers is for those 40 inches or taller, so be prepared before you go if your kid(s) are too small to ride.

When Cars Land first opened, the Luigi-themed ride was called Luigi’s Flying Tires (named after the owner of Casa Della Tires in the movie). After a short period of time, that attraction closed and was replaced with Luigi’s Rollickin’ Roadsters. This new ride features adorable little Italian-inspired cars that dance around on a trackless course to Italian music.

Luigi’s Rollickin’ Roadsters has a height requirement of 32 inches. There is some spinning, so be aware if you are sensitive to that. During Halloween and Christmas celebrations at the park, the ride has a themed holiday overlay.

The third ride in Cars Land is Mater’s Junkyard Jamboree, themed after Lightning McQueen’s best friend, tow truck Mater. This is another spinning-type ride, similar to the Alien Swirling Saucers. The rides spin around in figure eights across the platform.

As someone who typically can’t tolerate spinning rides, I sit this one out. However, it does look to be a smooth sort of spinning. You’ll need to be at least 32 inches to ride. Like Luigi’s Rollickin’ Roadsters, this ride does have a holiday overlay for Thanksgiving and Christmas.

Looking to meet some of your favorite characters in Cars Land. You can meet both Mater and Lightning McQueen right at the Cozy Cone Motel in Cars Land. Check the times guide or the app for specific characters and times to meet the characters.

There isn’t a sit-down, table service restaurant in Cars Land, but there are plenty of places to make a pit stop and get a snack or some quick-service food.

Sally’s Cozy Cone Motel takes center stage here as guests can step up and order from the individual cones. It’s best to check out the menu first, because each cone has something a bit different.

Menu items include churros, ice cream, beverages, chili cones, bacon mac and cheese cones, and signature alcoholic drinks. They do accept mobile orders, which you can make on the Disneyland app. I find mobile ordering to be so useful, especially when the parks are busy.

While this does look a lot like the Cozy Cone Motel at Disney’s Art of Animation Resort, that one is a pool area while this offers food.

Another fun themed food location in Cars Land is Flo’s V8 Cafe. The first time I saw it, I was completely captivated by how accurate it looks. It’s especially impressive at night.

Flo’s has an old-fashioned diner/gas station theme, and the simple, comfort food menu reflects that. At Flo’s, you can find quick-service food including fried chicken, cheeseburgers, Impossible burgers, fries, mac and cheese, and milkshakes. A kids’ menu, as well as alcoholic beverages, are available.

Once you get your food at the counter, there is seating available so you can enjoy it before heading back out. Like the Cozy Cone, mobile ordering is available and recommended.

Want to grab a quick healthy snack while on the go? Fillmore’s Taste-In (which is currently closed during the ongoing pandemic), offers fruit, mandarin oranges, Babybel cheese snacks, chips, and beverages.

Other Things To See at Cars Land

When you are done riding and snacking, there’s some shopping to be done at Cars Land. Three separate locations offer fun Cars-themed and general Disney merchandise. They, like the rest of Cars Land, are perfectly themed for Radiator Springs.

Radiator Springs’ own body shop comes to life as an apparel shop in Cars Land. Ramone’s House of Body Art offers clothing, accessories, and other gifts including some exclusive items, like the Champions Custom Speed Shop line, the Low ‘n’ Slow line, and custom work from Chip Foose.

Sarge’s Surplus Hut is an adorable army-themed hut offering mostly kids’ merchandise. It’s currently closed, so keep an eye on the website to see when it will reopen.

This lifesize model of the shop from the Cars movie sells Cars merchandise and apparel, as well as general Disney souvenirs.

Before you head out on your Disneyland vacation, be sure to check out our Disneyland packing list with ideas of what to buy and what to pack for your trip. 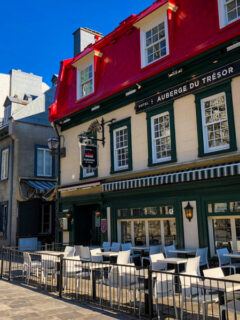