If you regularly read this site, you know that we are big Adventures by Disney fans. This past summer, we went on our third AbD family travel adventure – this one to London and Paris. So, when my daughter and I were invited on a media preview of the Adventures by Disney New York City Long Weekend trip, we were thrilled to be able to attend.

If you aren’t familiar with AbD, they are Disney’s guided tour company. While these adventures aren’t usually held at Disney destinations, they do include the type of service that you’ve come to expect from Disney. Adventures by Disney offers trips in many foreign countries, including South Africa, China, Italy, Greece, and Germany. But they also have several North American adventures, including long weekends/short escapes. These domestic long weekend trips are a great way to experience the magic of Adventures by Disney vacations in a shorter time frame.

Here’s our experience with our quick Adventures by Disney New York City Long Weekend Short Escape. While the regular trip is four days/three nights, this media preview was a condensed version of the trip, and lasted two nights.

Read why you should travel with Adventures by Disney here.

Disclosure: Our trip was provided at no cost for purposes of review. All opinions are my own. We have been on three additional Adventures by Disney trips at our own expense. 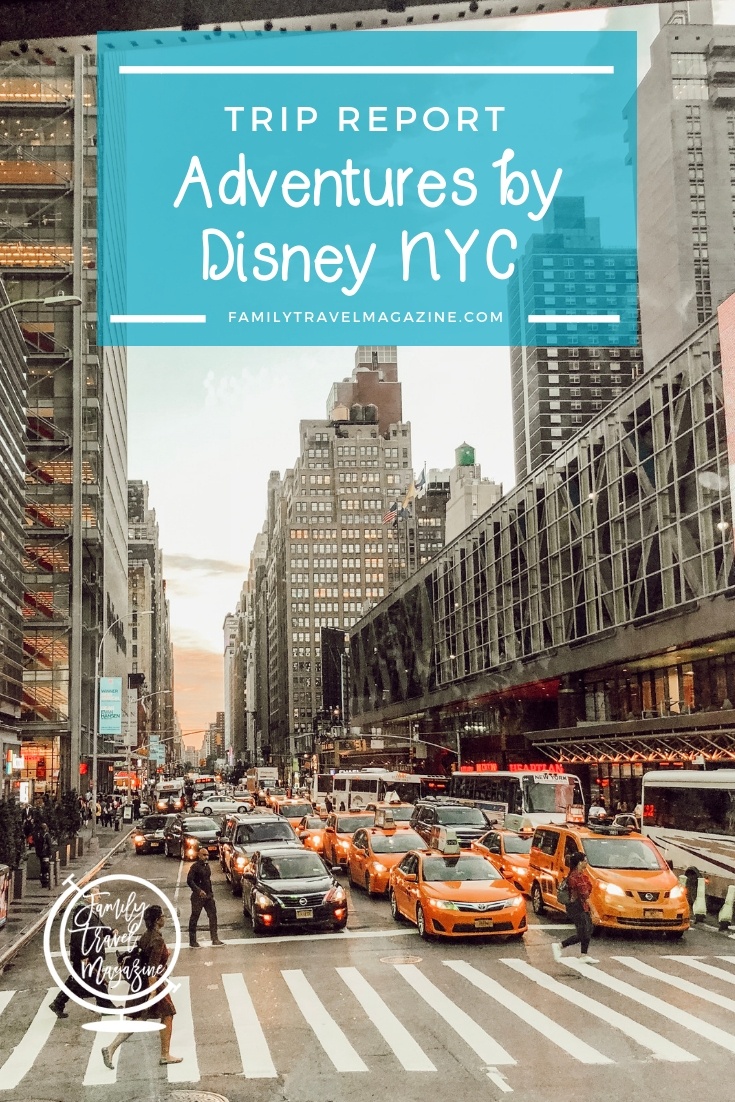 We woke up and headed to Logan Airport during the late morning rush. The flight from Boston to NYC is typically super short, so we thought we’d be in NYC nice and early to prepare for our adventure. Unfortunately, the remnants of Hurricane Florence had other ideas, bringing heavy rains and lightning to the Northeast, including both airports. We were delayed almost all day, but finally made it to JFK around 4pm.

During Adventures by Disney trips, you are often given the opportunity to pre order your food for big group meals. That way, the restaurants are able to prepare the food more quickly, and you save time for more sightseeing. Because we were missing part of dinner, one of our guides texted me to see which meals we wanted to order so they would be ready for us.

When we arrived at our hotel – the Intercontinental New York Times Square, we checked in, and were greeted by one of our guides who directed us to the conference room where the group was eating. We were able to quickly eat our meal and meet a few of our fellow adventurers. After going to our room to drop off our bags and freshen up, we met the group downstairs for our first activity – the Ride NYC. 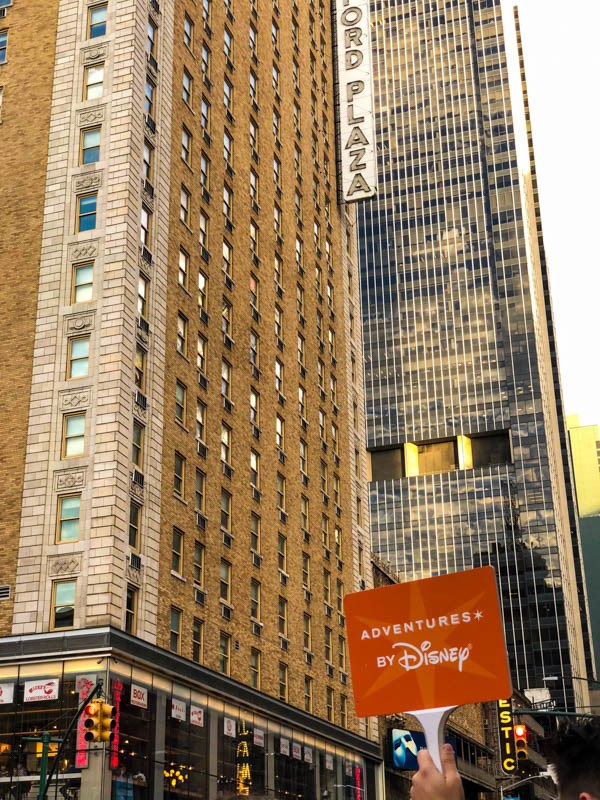 My daughter and I had been on the Ride during one of our previous New York City trips, but we were excited to do it again. This interactive bus adventure is about 90 minutes and includes a ride around Times Square and the surrounding area. During the trip, you are seated in stadium-style seats facing the side of the custom-built bus. That way, you get a full view of everything they are showing you.

But the ride isn’t a traditional tour. Instead, the guides are entertainers. In addition to the sites, like Columbus Circle, the Chrysler Building, Times Square, and Grand Central Terminal, you are also treated to entertainers outside the bus. It’s so much fun, and is such a unique experience. The Ride accommodates about 40 passengers, so we had a private tour just for our AbD group.

After the Ride was over, our night was officially over. We had the option to go back to our room, or head out on our own. My daughter and I were still hungry after skipping lunch, so we decided to head to the hotel restaurant and get a few small plates. Then, we went to bed, because we had an early morning wake up the next morning.

In our experience, Adventures by Disney chooses family-friendly hotels that are in excellent locations. That is absolutely true for the Intercontinental New York Times Square. We only had to walk a few steps in either direction to be in the center of the action. It’s a great location for a New York City vacation, from visiting the sites of Times Square to attending a Broadway show. 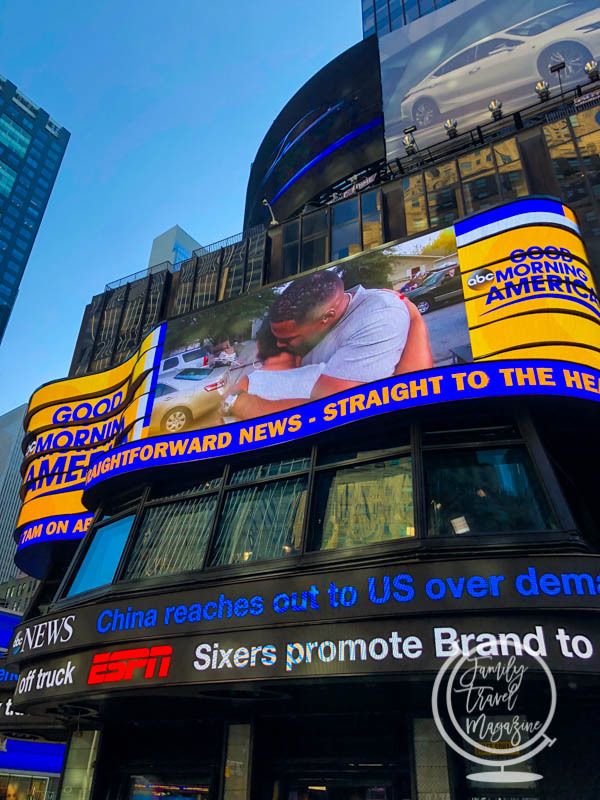 We started our day by meeting in the hotel lobby at 5:45am. Typically, the AbD groups meet after eating breakfast, but in this case, we hadn’t eaten yet. We walked a few blocks to ABC studios, where Good Morning America is filmed. We were guided up the stairs to a conference room where a continental breakfast buffet (including bagels, donuts, and breakfast sandwiches) was set up for us by one of our adventure guides.

We had some time to eat breakfast and use the restrooms, and then we were brought to a green room to wait to be seated. After a short time there, we were guided to our seats in the GMA studio audience. It was at least 30 minutes before the entertainment portion of the show was going to start, but the warm up guy Tom Kelly entertained us while we waited.

I think the GMA portion of this trip was my favorite, because I loved seeing the magic of live tv come together. I’ve been on some live sets, but nothing like this. It was amazing to see the sets dismantled and assembled during commercial breaks. We got to see Snow Patrol, Emma Stone, and Chrissy Teigen in studio. After the show wrapped, we were led back to the conference room where we had stored our bags.

Next, we walked outside to Times Square where we had a few minutes to explore. Our guides also took some photos of us. It was a short break, but enough time to grab another coffee or do a little shopping.

Our next stop was to the New Amsterdam Theatre, home of the Disney Broadway musical Aladdin. We walked over to the theater, and were led inside to the seats. The New Amsterdam was built in 1902-1903 in the Art Nouveau style. It has quite a storied history – from being the home of the Ziegfeld Follies to being transformed into a movie theater.

During our tour, we were given the history of the theater, were brought on stage, saw the backstage area, and finally, we able to see some of the props used in past Disney Broadway musicals. There were some times that we were able to take photos, and other times where we weren’t allowed. 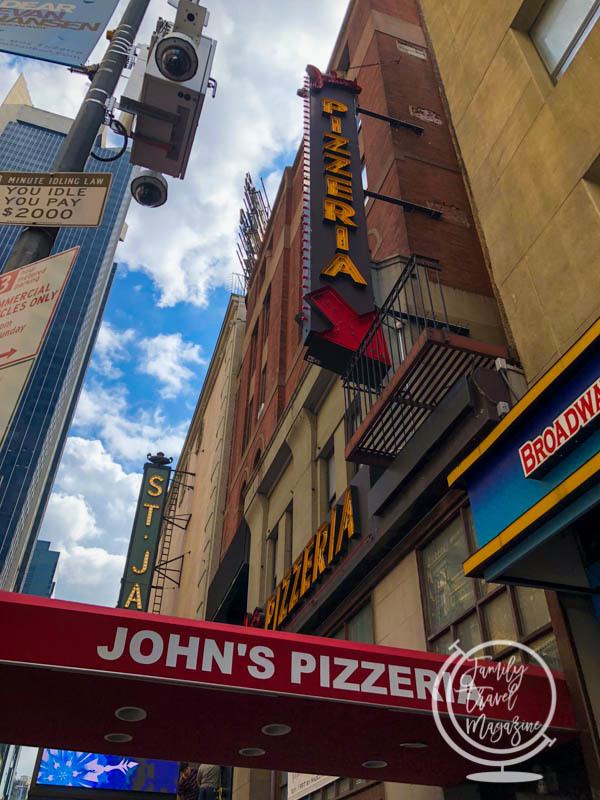 Then, it was lunchtime, and we were definitely hungry after an early wake up! We walked a short distance to John’s Pizzeria, also located in Times Square. Located in a former old Gospel Tabernacle Church, John’s is surprisingly the largest pizzeria in NYC. They serve only whole pies, and we were treated to a buffet with various varieties of pizza. It was a quick lunch, and we had a few minutes to freshen up at our hotel before heading out to our next location.

I was most curious about our next event. We walked a few blocks to a Broadway private rehearsal/audition space, to have the chance to learn choreography and music to a number in Disney’s Frozen musical.

We started by meeting our teachers and doing a few ice breaker activities. Then, we learned a bit about what goes on behind the scenes in putting on a musical. Finally, we were taught a small piece of choreography and music to the number, “Fixer Upper” from Frozen. It was taught in a manner that all levels could learn it. You definitely didn’t have to be a dancer! We loved learned this bit of choreography, and it was so fun to see it come to life later in the evening.

At that point, we had a few hours to ourselves. We took a quick walk to my favorite shop in Bryant Park, and then walked back to our hotel. My daughter was missing school during our adventure, so she needed to take some time to do schoolwork. We also showered and got ready for our evening. I ordered room service so that we’d have more time in the room to get ready, and we enjoyed some light bites. 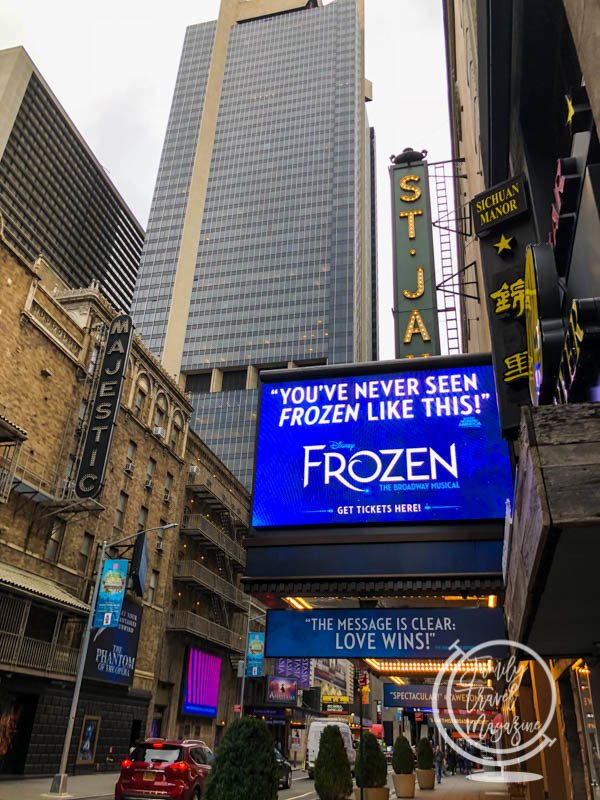 The last part of our evening was what we were most anticipating – attending a Disney Broadway musical. The St. James Theater, home of Frozen the Musical, was just a 2 minute walk from the Intercontinental New York Times Square. We met in the lobby and were given our tickets, then crossed the street and walked into the theater.

My daughter and I love seeing Broadway shows, so we were thrilled to see Frozen the Musical with AbD. We were even more excited when we realized that we had fourth row seats. Our group wasn’t seated all together, but everyone was within the first five or so rows of the theatre. I’ve never had seats that close to any show, and it was so amazing.

We absolutely loved the show. The actors are all fantastic, and they’ve added in a few fun new songs that are perfect in the flow of the story. I would definitely recommend seeing it if the opportunity presents itself. I imagine that it will be on Broadway for a long time. During intermission, our Adventures by Disney guides provided us with a little treat. We also had a little surprise at the end of the show. 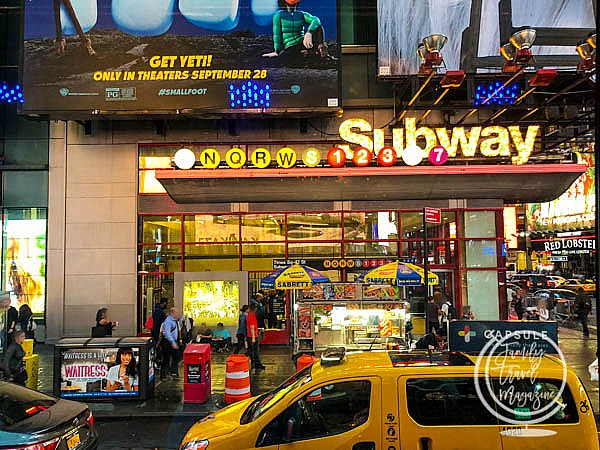 Just as quickly as it started, our adventure was just about over. First, we had a farewell private breakfast buffet in the hotel. It was offered over two hours and was drop in, so we didn’t have to wake up too early. We enjoyed chatting with some of our fellow adventurers, and then headed back upstairs to pack and get ready to check out. Our New York City short escape was a fabulous vacation, and we left in just two days with so many wonderful memories of our experiences.

If you are considering booking the Adventures by Disney New York City Long Weekend/Short Escape, you should know that this wouldn’t be the end of your adventure. The itinerary for the actual trip is a bit different, and includes lots of other experiences in the culture and cuisine of New York City. While everything we did was located right in the Times Square area, you’ll be taking a motorcoach for the other components. The order of the trip is a little different, and a few other experiences are included:

This trip is also a great add on to a Disney Cruise Line vacation leaving from New York City. The itinerary includes so many great activities, from attending a Broadway musical to visiting a historic neighborhood in the city. It’s perfect for a Broadway fan too, since you get such an amazing and unique behind the scenes view of musicals.

Previous
Things to Do in Martha’s Vineyard With Kids

Next
Things to Do in Orlando With Kids
Comments are closed.