All About the Disney Cruise Pirate Night 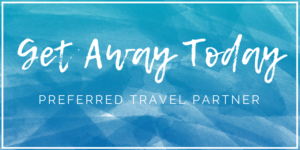 Disclosure: I’ve been on the Disney Cruise Line many times at my own cost, twice as part of Disney Social Media Moms, and once on a media cruise. All opinions are my own. This post contains affiliate links. A purchase through one of these links may result in a commission paid to us. 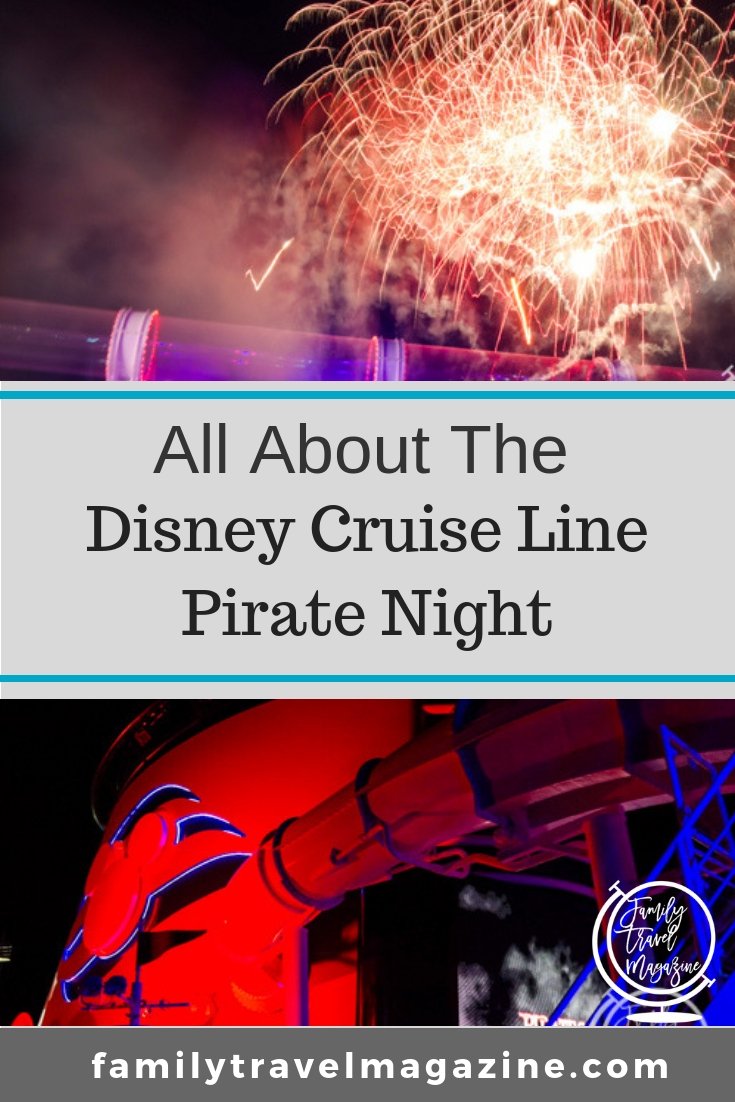 All About the Disney Cruise Pirate Night

What is the Disney Cruise Pirate Night?

This special night, held on one day of most Caribbean sailings, includes shows, characters, special food, and so much more. It’s typically held on a day at sea, if one is included on your itinerary. But it can definitely vary. For the three day Bahamian itinerary on the Disney Dream, it’s typically on the Nassau port day. The event is very popular among cruisers and you’ll often see families all decked out in their pirate garb. 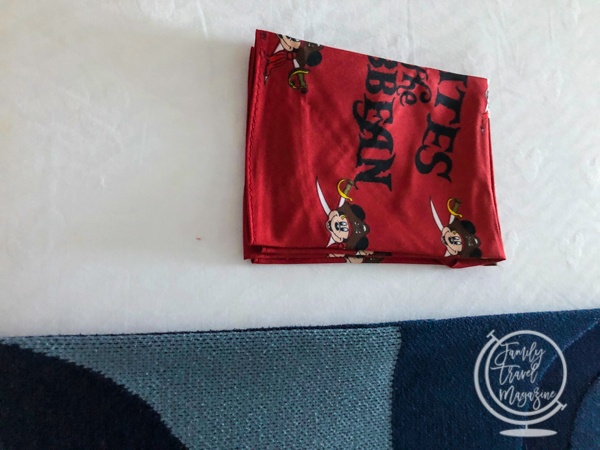 You may be wondering – “Do I need to dress up for pirate night?”. While many families do dress up for pirate night, many do not. You’ll see everything – from families with every family member dressed up, to families with just the kids dressed up, to some with just a few accessories like a pirate bandana and/or an eye patch, to absolutely no pirate apparel at all. Typically, my family doesn’t really dress up much (except for a bandana) and we feel very comfortable. Everything goes.

Pirate costumes are available on board, and the onboard Bibbidi Bobbidi Boutique transforms into the Pirates League for the special night. You’ll want to book reservations for that, as early as you can to ensure availability. You can also purchase some accessories in the on board gift shops, and your stateroom attendant will leave complimentary bandanas in your stateroom for the party.

You may also decide to bring your own pirate accessories and costumes from home. Here are some you can easily purchase and bring on board with you. If you are participating in a Disney Cruise Line Fish Extender exchange, some fun gift ideas are pirate party accessories like bandanas, eye patches, and glow sticks. Just make sure that you give them as gifts before they are needed. 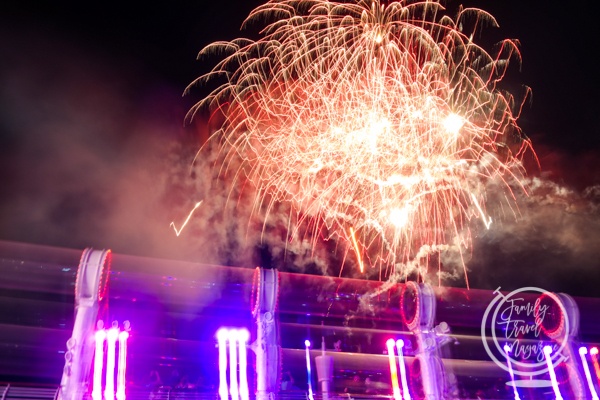 All day, you’ll be treated to a variety of pirate-themed shows and activities. You’ll find things like pirate crafts, the So You Want to Be a Pirate Game Show?, pirate games, the Disney Junior Pirate and Princess Dance Party. Some of these special activities also take place in the Oceaneer Lab and Oceaneer Club. All of these events and activities can be found in the Daily Navigator or on the Disney Cruise Line app.

Throughout the day, you’ll also find character greetings with some of your favorite pirate characters, like Captain Jack Sparrow, Captain Hook, and Mr. Smee. Other characters will be dressed up especially for pirate night. 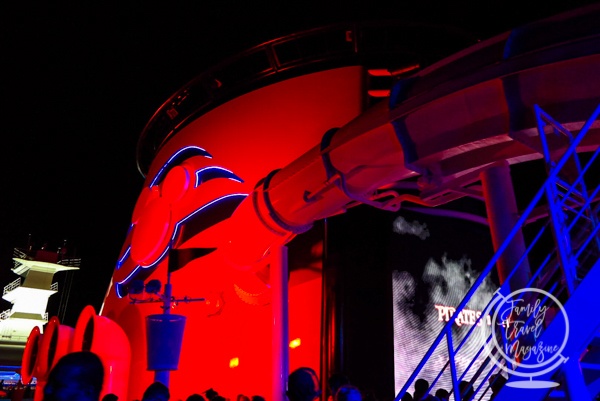 Pirates in the Caribbean Party

The highlight of the event is the Pirates In the Caribbean Party. This show takes place on the pool deck, and is extremely popular. Almost every passenger on board heads up to see the show, so you’ll definitely want to go early to get a great viewing spot. You can also go to the deck above the pool deck, which may be a better option to see everything.

The deck party includes a fun pirate-themed show, which culminates in a spectacular fireworks show at sea. It’s always amazing to see fireworks at sea, and as you’d expect, Disney definitely puts on a great show. Note that this show is weather-dependent, so it isn’t a guarantee. However, on 11 Caribbean sailings, we’ve never had the show cancelled.

During our past sailings on the Disney Fantasy, Disney Wonder, and Disney Dream, the pirate show was pretty late at night after the last seating for dinner and the last evening show had finished. While I loved the show, it was definitely late at night for the youngest kids. On our first cruise, I actually woke my kids up to take them to the party.

On my most recent sailing on the Disney Magic in January, the Pirates In the Caribbean Party took place at 7:30, between the two seatings for dinner. I definitely prefer that time, because we aren’t exhausted by then. It’s not clear if this is something that is a permanent change, but you’ll definitely want to check your Personal Navigator or the Disney Cruise Line app to see what time it is taking place on your sailing. Personally, I hope they stick with this earlier time for the younger kids. 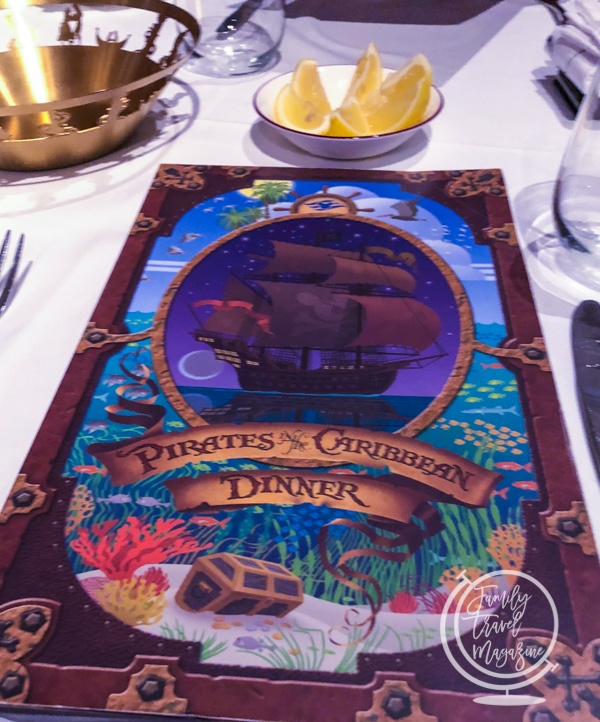 If you are sailing on a three-night cruise, you’ll have your traditional dining rotation on pirate night, with the regular dining room menu. However, if your trip is four or more nights, you’ll have a special pirate themed dinner. For this dinner, servers dress in pirate apparel, and you’ll be given a separate Pirates In the Caribbean menu. Everyone on the ship, regardless of the dining room they are assigned that night, get the pirate menu (except for Palo and Remy). To be honest, I don’t love the menu on pirate night (I prefer the traditional menus at the restaurants), but the food is still delicious. If you are planning to go to Palo, you may want to do it on pirate night.

When booking a Disney Cruise, I recommend booking with Get Away Today. Plus, when you mention Family Travel Magazine, you get an extra $25 on board credit! Give their agents a call at 877-510-2929. 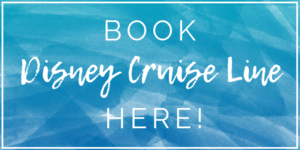 Have you ever experienced Pirate Night? What is your favorite? 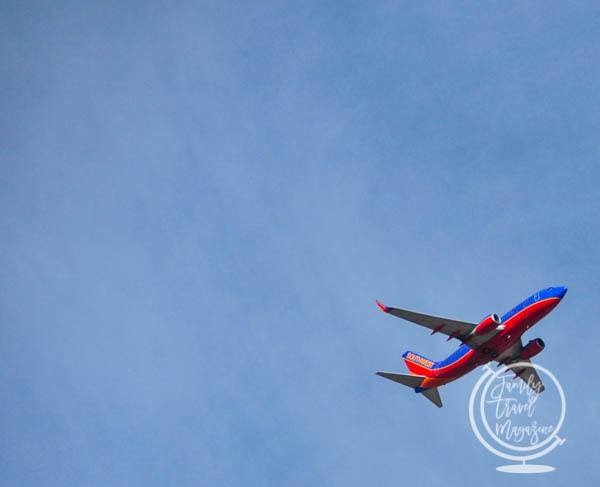 Previous
How to Find the Best Flight Deals

Next
A Complete Guide to Boston Logan Airport
Comments are closed.